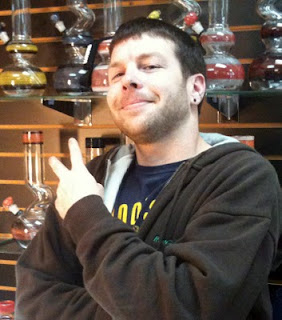 Hey Now!, my name is Mike (Tmo if you simply have too many Mikes in your life). I am the newest addition to Smokin Js. I’ve been a long time customer and now I’m on the other side of the counter. It’s a huge privilege to work at Smokin Js. The store opened in 1997, the same year I graduated from high school. I was a prime candidate to be a customer for a smoke shop! However, the ARMY started for me that same year, so all my plans for fun went up in smoke;)

I put four years in the service and saw the world in so many different ways. The travel was exciting, and so was deployment. I got out of the ARMY and went to work and school full time. I eventually worked in the solar industry for a decade. I was on top of my goals and personal expectations. By 2009, I was living life to the fullest: Quads, snowboarding, motorcycles, long range shooting, and finding extreme things to put my body & soul to the test.

“Life is what happens while you’re busy making other plans.” I heard that from my grandpa when I was too young to understand what it meant, but I idolized him so I said it all the time. As much as I said it, I should have spent more time applying it’s many meanings to my life. In January of 2010, I was heading on my way to work and noticed that my face was feeling unusual on the right side, and by that night my right arm was feeling the same. I’m not big on doctors so I ignored it, along with a few other symptoms that were weird, but not too alarming; and the symptoms didn’t slow me down enough that I had any concern for myself. By March, I could not control my movements. My muscles were going crazy. My eyes, voice, breathing, and ability to walk, were so embarrassing, I rarely left the house.

I had gone through every blood, urine, and scan testing the medical field had to offer. I even had a lumbar puncture done while I was on a five day hospital stay. Many neurologists looked at me with confusion, sympathy, and sometimes disbelief. I couldn’t hold a tool in my hand anymore when I finally succumbed to the mysterious monster in me that I had no control over. I was in denial that I was losing my life and had no answers for it. I had swept my symptoms under the rug until I literally couldn’t hold on to anything.

In April of that same year, my boss asked me to talk to my doctor about a physical limitations review and a statement saying I could safely continue my work. That never happened. I was on disability just a few short days later. Disability insurance agencies are a nightmare. Social Security is another tough benefit to pick up with all the steps and processes that are involved. That being said, I was out of work for over a year and a half. I had bills to pay and life changes to deal with. I sold all my guns, guitars, skateboard, snowboard, etc. I was still struggling with money, life, and doctors appointments.

That summer finally brought relief for me. OHSU has a great neurology department that took all of my records, tests, and findings. They spent time with me as a “research” patient. I was put through what I felt like was hell, doing a bunch of different movements, and trying repeat things they would do. It seemed like I couldn’t do anything they asked me to. I was still having emotional episodes when I would try things that my symptoms would stop me from doing. I was unable to write, use my hands, or even walk, without major shaking, jerking, muscle spasms, and/or contractions. I couldn’t even keep a normal looking facial expression, let alone hold my head straight.

After my first appointment at OHSU, they prescribed a Parkinson’s Disease medication. It has been very successful for many people with movement disorders like this. Within two days, I knew that the meds were working. It was a sweet and sour feeling finding out what was wrong with me. In one sense I was getting better, but on the other hand, I found out that I have Parkinson’s Disease. After all the tests and brain scans, I found out by seeing if a pill would help by random chance. So that was it, I had Parkinson’s and I knew it before any doctor did for sure.

So I was looking at early retirement when a little bit of self motivation, and the thought of rotting away in my house, started to make me think of work solutions. The disability company and the great state of Washington were unable to find an educated and experienced person like me a job, “due to my illness”. After coming into Smokin Js for some of my usual smoking staples, I couldn’t help but think, “This would be my dream job.” I submitted my resume. After the usual hiring process, I was welcomed into the Smokin Js family.

So you maybe wondering what the fu@k this blog is actually about. Well I think there’s a few different things you could take from this. Maybe this is like one of those lame songs that the band says “it’s up to the fans to come up with their own meaning”. I can say that opportunities will arise if you make them for yourself. I can also point out that Smokin Js history is so long rooted in this area, that when I graduated from high school, they were a cool place to flex that 18th birthday muscle, and now that I’m in my 30’s they are a salvation of employment for me. I’m a bigger fan now than when I came here 14 years ago. Smokin Js means so much to so many people, we try to show that back to you every way we can. Hell I came back out of a sure fire retirement, because I want to be here for you. The last thing I can mention that I learned from my illness, I later read in a Reader’s Digest article with Michael J. Fox and noticed he had said the EXACT same thing that it took Parkinson’s to teach me. “Acceptance and Gratitude are what I have learned from my illness.” I think everyone should learn to accept their current situation, and accept others differences and similarities. Embrace one’s uniqueness. Be gracious to everyone all the time. You’re never better than anyone else. You aren’t entitled to live a life better than anyone else, because in the end it really wont be a choice. When life gives you lemons, make something better than lemon-aid damn it! Never give in.